Thou shalt have a fishy on a little dishy ...........
This super shallow 19th Century dish decorated with three transfer printed fish was used for potted char, a popular delicacy from the 18th century onward. This fish, whose full name is the arctic char (Salvelinus alpinus), is related to the salmon, and in England is only found in deep land-locked lakes, notably Lake Windermere in Cumbria.
Early recorded recipes give instructions for long, slow cooking over several hours which suggests they would have been placed in a bread oven, taking advantage of the residual heat after baking. The finished dish called for copious amounts of clarified butter to form a preserving seal, in much the same way as potted shrimp.
The pot needed to be reliably stable and stackable so that it could be transported, hence it was made wide, shallow and flat-bottomed.
This delightful example will be offered for Auction on Wednesday 28th November (Antique and Interiors Sale) 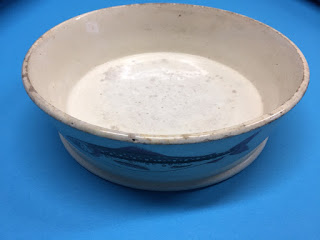 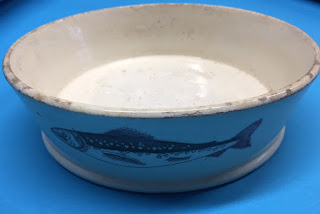 Posted by Boldon Auction Galleries at 13:52