Auctioneer Tom Robson hit the limelight today when he was featured on the front page of The Journal. 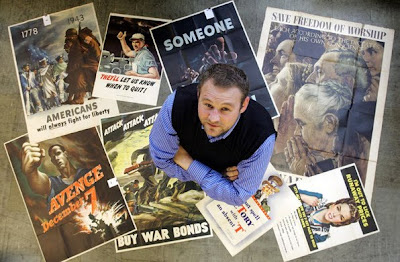 This may actually have had a little bit to do with the fantastic collection of Second World War American propaganda posters that went under the hammer this morning not just Tom's dashing good looks! 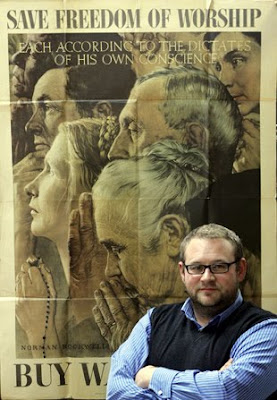 We always knew Tom was destined for celebrity status - but at least he hasn't let fame go to his head and still makes a great cup of tea!
Posted by Boldon Auction Galleries at 15:38 1 comment:

Coming under the hammer at Boldon Auction Galleries Fine Art & Antique Auction on Wednesday 22nd September are a Private Collection of original Second World War USA Military propaganda posters produced and dated between 1942 and 1945 by the Office for War Information. 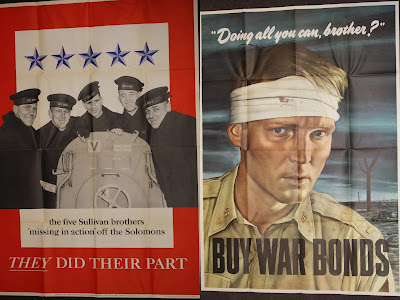 War posters served an important role on the Home Front in the United States during World War II. The posters were used to keep Americans informed of the war which often seemed remote and not directly relevant to them, to remind them of their patriotic duties, and to instill a sense of anger towards the enemy nations. 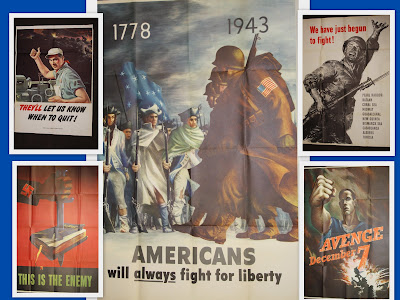 The Office for War Information (OWI) was created in June 1942. Its function was “to promote, in the United States and abroad, understanding of the status and progress of the war effort and of war policies, activities, and aims of the U.S. government.” Eventually, two contending groups within the OWI clashed over poster design. Those who saw posters as "war art" favored stylized images and symbolism, while recruits from the world of advertising wanted posters to be more visually appealing like adverts. 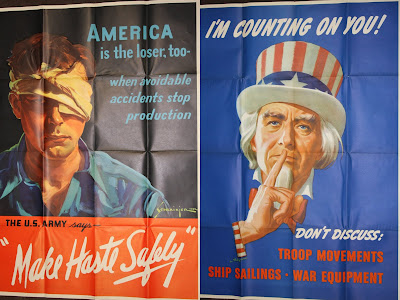 More than 8000 artists, who belonged to "Artists for Victory," designed posters for the OWI. A realistic, three-dimensional style replaced the flat, abstract images typical of the First World War. Unlike the earlier propaganda, which inspired fear and hatred of the enemy, President Roosevelt preferred more positive imagery that involved Americans and personalized the war effort for everyday Americans. 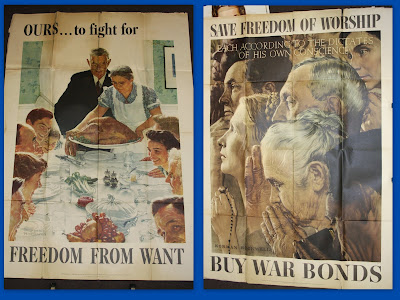 The advertising specialists within the OWI finally gained the upper hand in 1943. From that time, government posters looked more like magazine illustrations, and the idea of "war art" was abandoned. "Information campaigns" were now run using posters in conjunction with magazines, radio, and other kinds of paid advertising space to maximize the impact of the propaganda message. (The OWI was closed down in September 1945). 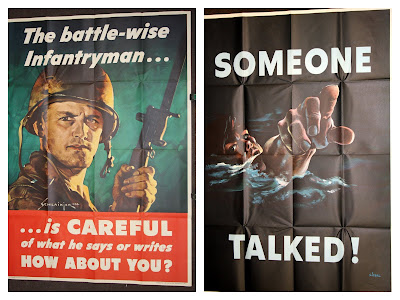 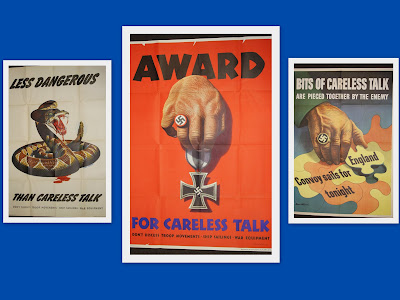 or over consumption of precious resources. 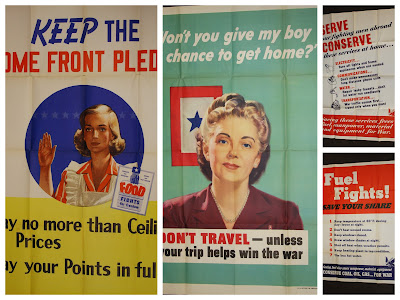 This is a real chance to purchase a piece of Social Political History. For more details please contact us on 0191 537 2630 or visit www.boldonauctions.co.uk.

Posted by Boldon Auction Galleries at 15:10 No comments: 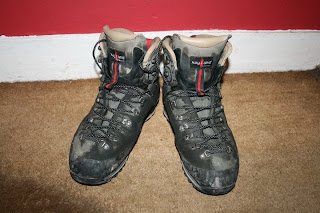 This weekend Giles Hodges proved that there's more to him than meets the eye, when he took part in the National Three Peaks Challenge as part of the British Military Fit team.
The team started at the ridiculously early time of 4am at Ben Nevis (1344m) in Scotland completing the first mountain in 4 hours 15 minutes,
then drove down to Scafell Pike (978m) in the Lakes where they started climbing at 2pm finishing in 3 hours 30 minutes
and then drove on to Mount Snowdon (1085m) in Wales arriving at 10.30pm and completing at 2.30am! 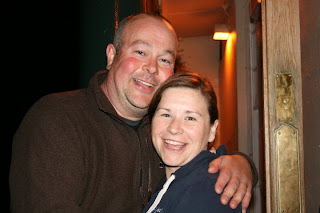 Giles and Caroline Hodges 3am Sunday morning very tired but happy!
This involved walking approximately 27.5 miles (up-hill!) and driving for about 10 hours.
Giles took part in this mammoth feat to raise money in aid of the Breast Cancer Campaign.
His fundraising target was £1000 and we are delighted to announce that he succeeded and has already raised over £1,200
But every penny counts....
.....so if you would like to donate to this very worthy cause please see Giles' fundraising page and give as generously as you can.
Many Thanks
Posted by Boldon Auction Galleries at 15:06 No comments:

Piecing together the past

Hundreds of hours of painstaking work were rescued from a box of items brought in for one of our recent General Household Sales....... 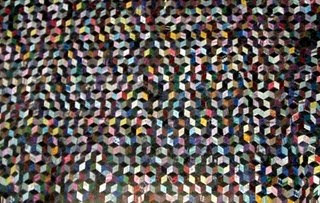 This huge quilt top has been hand sewn using the "English paper piecing method" to make a dramatic "tumbling blocks" quilt where each block of three diamonds creates the 3 dimensional appearance of a child's wooden block. The quilter has carefully selected black satins and velvets to create the top of each "block" to emphasize the design. 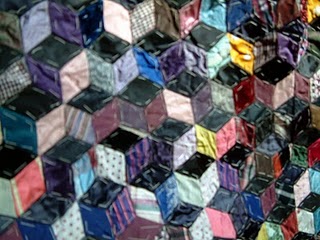 This example has clearly been made from a wide selection of former items of clothing with velvets and satins amongst the standard cottons. Re-using clothing in quilts was common practice when new fabric was considered a luxury item, but this only serves to make this quilt an even more important historical record of fashion, textiles and austerity. 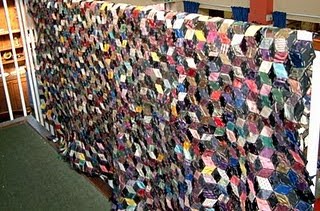 Because this quilt top has been paper-pieced but never actually quilted (by layering it with wadding and backing fabric and then stitching through the three layers) the majority of paper templates are still held in place behind each diamond. The quilter has used a wide variety of paper pieces such as old letters and pages from publications and closer examination of these would help to date the quilt.
The quilt has now been consigned to our Fine Art and Antique Auction to be held next week on Wednesday 22nd September as Lot 152, and can be viewed on Saturday 18th September between 10am and 1pm and on Tuesday 21st September between 2 and 6pm.
Posted by Boldon Auction Galleries at 11:39 No comments:

Preview of our next General Sale - edited to include sale prices

This week's selection of items coming up for sale on Wednesday 8th September at 10am ranges from collectable china to vintage toys and is sure to appeal to a wide audience.

A trio of  Goebel birds make up Lot 277
with this strikingly stylised bird really catching the eye. 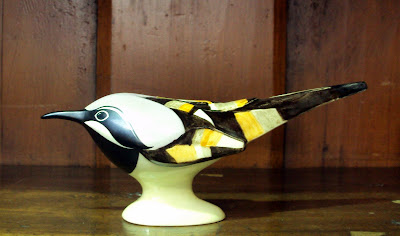 Following on from the Telescopic Organ in the last sale (which fetched £32) we have more interesting musical instruments this week.
The first is a boxed Hohner Carmen III accordion
and the second, more unusual piece, is this peculiar looking Phonofiddle - a single stringed "violin" with a horn - similar in design to the Stroh violin. 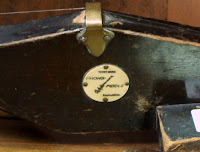 These were apparently invented in the early 1900s by a London instrument maker called Arthur Thomas Howson who had originally trained as an accordion maker with his father.
The Phonofiddle had a gramophone type sound box inside the body of the instrument and an external horn to amplify the sound and deepen the tone.
Toy and games collectors have a wide selection to choose from in next week's sale with two different vintages of subbuteo games available, 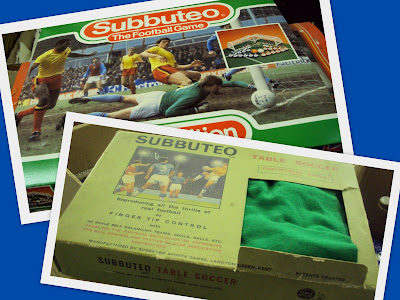 this charming wooden toy phone - complete with "ringing" dial, which would be a great addition to any vintage toy collection,
and this boxed Mamod Steam Engine for the steam enthusiasts.
Finally, tucked away in a mixed box lot, is this tiny marmite cube tin

which is full of vintage sewing tools including bodkins, machine needles, a boot button hook, an ivory crochet hook and various other items 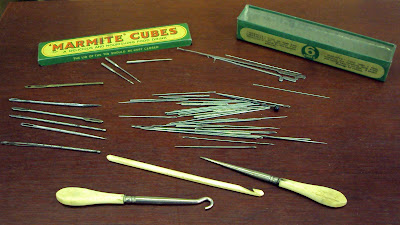