SOME like it hot – and that could be the case when the bidding starts today at a Tyneside auction house.

For on offer is an item of film legend Marilyn Monroe’s underwear. 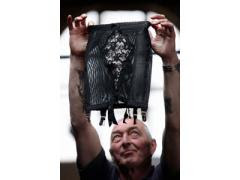 Boldon Auction Galleries in South Tyneside is selling a black nylon girdle said to have belonged to Marilyn.

The lot is accompanied by two signed letters written by Elaine Barrymore, who was the fourth wife of Shakespearean actor John Barrymore.

Elaine became a friend of Marilyn Monroe, who entrusted her with two trunks off personal possessions shortly before the star’s death.

“As a young actress I married the legendary actor John Barrymore. We starred in a vast amount of stage, screen and radio productions.

“Subsequently I came to meet and befriend many great stars and began what was to become a lifelong hobby of collecting stage and movie memorabilia.

“In the 1950s my friend Marilyn Monroe and I became neighbours in New York.

“She feared theft and entrusted me with two large trunks full of personal and studio possessions.

“Soon after she went to Hollywood and her life declined. I have had these items all these many years. I decided to share them with Marilyn’s many admirers and fans.

“It is comforting to know that her belongings will be cherished by those who loved her.”

Auctioneer Giles Hodges said the girdle was being sold by a vendor from Burnhope in County Durham.

“It is a very odd item to be selling but it is a piece of history from a woman who was the epitome of the film star,” said Mr Hodges.

“Clothing items like a hat or gloves are more usual auction items but underwear is a different case.

“Perhaps it was first sold in a charity auction.

“But everyone wanted a slice of a star like Marilyn Monroe and perhaps items were taken with or without her knowledge.”

The sale comes after a set of three X-rays of Marilyn Monroe’s chest taken during a 1954 hospital visit sold for £29,900 in Las Vegas.

The X-rays, sold at a movie memorabilia auction at Planet Hollywood had a £2,000 pre-sale estimate.

Other Monroe items up for sale included a prompt book from unfinished film Something’s Got to Give and a bottle of Chanel perfume she owned.

Posted by Boldon Auction Galleries at 19:51 No comments: