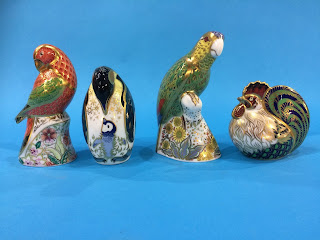 Since approximately 1750, the Royal Crown Derby Porcelain Company have produced some of the finest bone china. This includes tableware and ornamental items such as the fantastic selection of paperweights we have pictured here. Based in Derby, England the company is one of the oldest English porcelain manufacturers remaining.  The company was known as ‘Derby Porcelain’ until 1773, they then adopted the name of ‘Crown Derby’, adding the ‘Royal’ in 1890. Giving them the more commonly recognised name ‘Royal Crown Derby’. Although suffering a company closure under the ownership of Royal Doulton, Royal Crown Derby was revived under the renewed ownership of Hugh Gibson and the Pearson family. The pieces created by Royal Crown Derby continue to be much sought after and loved items today.
Posted by Boldon Auction Galleries at 12:03