So the saying goes, 'there is no use crying over spilled milk'
With this fabulous 1930's Galvanised steel Milk Churn,
we don't think you'll spend much time crying!
The fitted brass plate engraved Blair.Langley on Tyne. 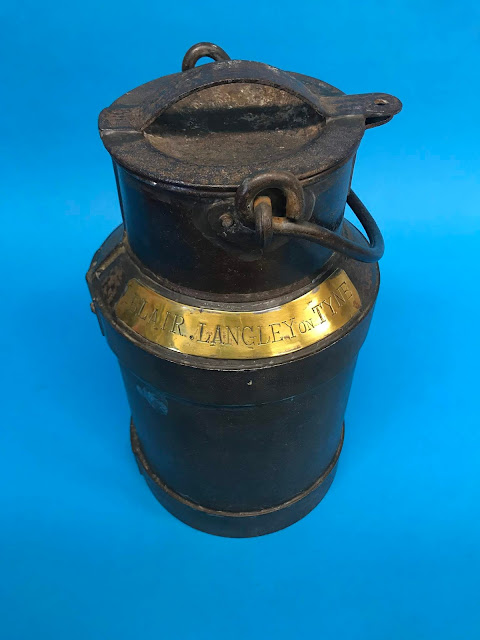 With recognisable tall, conical or cylindrical features the milk churn was developed for the transportation of milk; as a replacement for the milk pail. Once milk started to be transported via railway, the lidded bucket referred to as a milk pail became a less than ideal method to transport milk, often spilling due to being top heavy. Farmers recognised that the wooden butter churns used to churn the milk into butter were a more favourable way to transport milk on the railways. In 1850 and due to the heavy weight of the wooden churns a steel version was manufactured and introduced as a replacement, although the term churn remained to describe the vessel, despite no longer being used to churn butter. The older versions were galvanised iron conical churns and held 17 gallons of milk whereas the modern cylindrical type introduced in the 1930’s held only 10 gallons. All churns were identifiable to the company owning them by a brass plate near the top with the company name engraved. Churns were no longer used in Britain from 1979 when the collection of milk by tanker became more favourable. Before tankers, farmers used to leave milk churns by the roadside on purpose-built milk churn stands awaiting collection.

Posted by Boldon Auction Galleries at 14:13