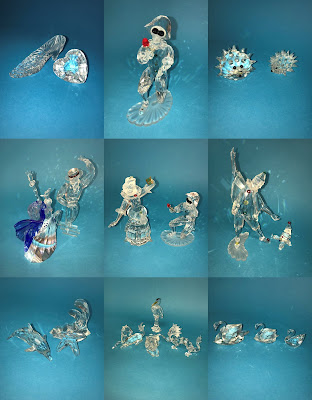 Headquartered in Wattens, Austria, Swarovski is an Austrian producer of lead glass more commonly known as crystal. The Swarovski Crystal Business, that primarily produces lead glass jewellery (commonly called crystal jewellery) and accessories is one of three of the major sub-businesses of Swarovski; the others include Swarovski Optik, which produces optical instruments such as telescopes, telescopic sights for rifles, and binoculars; and Tyrolit, a manufacturer of grinding, sawing, drilling, and dressing tools, as well as a supplier of tools and machines.
Born in northern Bohemia (now the Czech Republic), 20 km from the current border with Poland Daniel Swarovski’s father was a glass cutter and owned a small glass factory. Serving as an apprentice in his fathers company Daniel became skilled in the art of glass cutting. Daniel patented an electric cutting machine in 1891 that facilitated the production of crystal glass. In 1895 Daniel, along with financier Armand Kosman, and Franz Weis founded A. Kosmann, D. Swarovski & Co, later shortened to KS & Co. With a vision to make ‘a diamond for everyone’ Daniel took advantage of the local hydroelectricity in Watten, where he and his partners established a cutting factory and which he used to power energy-intensive grinding processes used to make his ‘affordable’ crystals. Expanding to France and first using the edelweiss flower in their logo in 1899, the company were known as Pierres Taillées du Tyrol. Daniel then founded Tyrolit in 1919, which brought the grinding and polishing tools from the crystal business into a different market. Daniels son Wilhelm Swarovski customised a pair of binoculars in 1935 leading to the launch of Swarovski Optik 14 years later. Swarovski Optik manufactures optical instruments such as binoculars and telescopes. In 1977, Swarovski entered the jewellery market in the United States.
All Swarovski creations are marked with a logo. The original logo was an edelweiss flower, which was replaced by an S.A.L. logo and then 1988 with the current swan logo.
The Swarovski Crystal range includes lead crystal glass sculptures and miniature, jewellery and couture, home decor, and chandeliers. It is best known for its small animal figurines.
Posted by Boldon Auction Galleries at 12:03