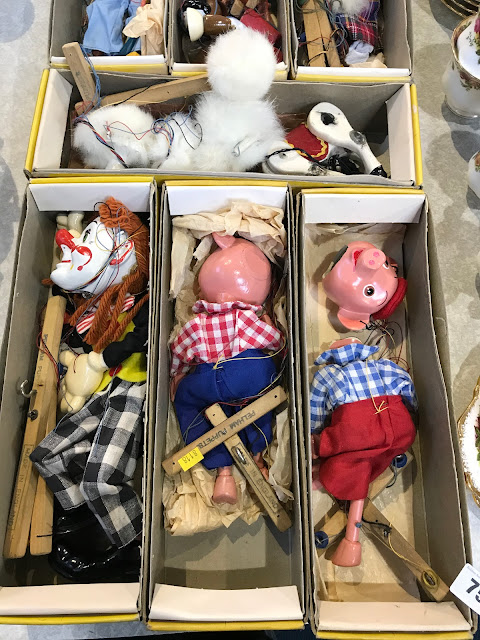 These wonderful puppets are for Auction on 5th October.

Pelham Puppets History: Bob Pelham served in the Armed Forces from 1939 and during this time became known as 'The Wonky Donkey Officer' due to his penchant of making small, wooden, animated donkey toys. After the war a toy making company was created in the name of Wonky Toys Ltd.

These simple puppets, made from recycled materials and packaged in a simple brown box were so popular that by 1952, the company was in need of much larger premises in order to keep up with the increased production. Pelham, whilst staying in Marlborough, moved it's offices and retail store to Elcot Lane and one year later purchased a three story factory on London Road, on the south bank of the River Kennet, which would go on the become the permanent home of Pelham until 1987, when the original company ceased trading.

The Pelham company went from strength to strength and at it's peak was producing thousands of puppets in a multitude of different colours, sizes, designs and sets. One of the biggest achievements for Bob came in 1953 when the company won the rights to produce a set of Disney puppets. This acquisition started a pattern of fighting for commercial rights to other brands and many sets followed including The Magic Roundabout, The Muppets, Peanuts and The Wombles. All of these successes however suffered a drastic set back when, in October 1961, the London Road factory caught fire and was nearly all destroyed. Stock, materials and many documents were lost but, not to be deterred, Bob and the rest of the company set about building a new factory on the same site, as quick as possible in order to catch up with the lost time.

The 1970s proved to be the the busiest decade experienced by the company and rapid expansion was required in order to keep up with the now international demand which included shipping to over 40 countries. However, despite the fact that business had never been better, it was from this time that Bob began to lose his enthusiasm due to the ever increasing commercial nature of his company; it had grown from a small office of close colleagues to an enterprise based across several premises producing at full speed, all day every day. Bob's troubles reached their worst during the 1980s when Pelham had to make several hundred loyal employees redundant due to the falling economy. After this period of decline for the factory tragedy struck when, in mid 1980, Bob died suddenly at his home. His wife Anne, who had also been a long term employee of the company and had played a huge part in it's success, continued to operate the company for the following six years until she reached the point of retirement and closed the original factory's doors for the final time.

Following the closure of the original Pelham factory and brand various companies tried, without much success, to bring back the former glory experienced in it's heyday. The rights to the name traded hands many times until it was finally purchased by one employee, and long time friend of Bob's, David Leech. This venture, although not on the same scale as the original factory, produces Pelham puppets to Bob's original designs and standards (as well as some new ones) and continues to be an ambassador for the brand.

Posted by Boldon Auction Galleries at 14:42