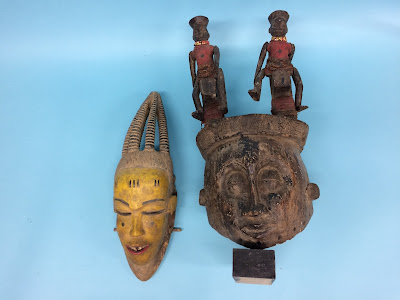 Just arrived in the Saleroom are these two
incredible Tribal Masks - a Dogon Helmet Mask from
Mali and a Baule mask from the Ivory Coast. For
Auction on 25th May. 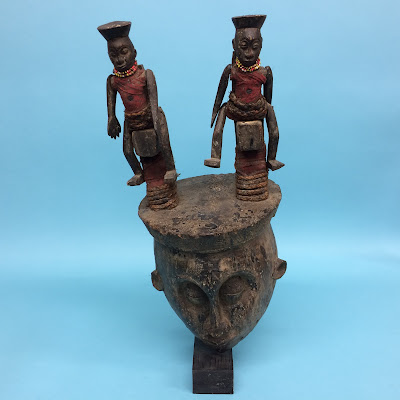 The Dogon people are from Mali spreading across the border into Burkina Faso.
Mainly an agricultural people who live in villages composed of patrilineages (family members belong to the father's clan and share a common village surname) and extended families whose head is the senior male.
Dogon religious life is heightened every 60 years by a ceremony called the sigui, which occurs when the star Sirius appears between two mountain peaks. Before the ceremony, young men go into seclusion for three months, during which they talk in a secret language. The general ceremony rests on the belief that some 3,000 years ago amphibious beings from Sirius visited the Dogon.
The Dogon are best known for their religious traditions, their mask dances, wooden sculpture, and their architecture.
The most impressive element of a dancer’s regalia is the headpiece, or imina (mask), that is tied to the dancer’s face with cloth bands. Sometimes decorated with fibres, cowry shells, or beads, the masks are highly valued by foreign collectors. More than sixty different masks symbolize the worlds of the living and dead; some represent animals or people, and others portray spiritual beings or human attributes such as male or female power. Masks are said to contain nyama, the life force within both humans and animals. Because of their association with death, women (who are associated with fertility) may not touch or come in contact with a dancer’s mask. Most dancers wear regalia designed to enhance movements, such as coloured hibiscus fibres attached to the wrists and ankles. Decorations may also include breastplates made from shells and beads worn above loose pants. Colours used within regalia represent the four basic elements: red (fire), black (water), white (sky), and yellow or ochre (earth). To maintain the integrity of costumes, materials such as paint, dye, and fibre must be obtained from the bush. 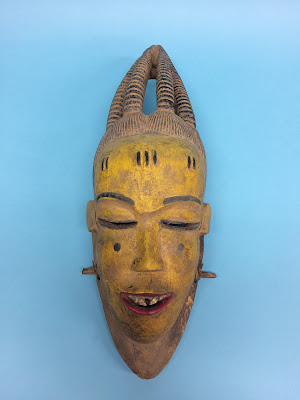 The Baule or Baoulé are an Akan people and one of the largest ethnicities in Ivory Coast who historically migrated from what is today Ghana. The Baoulé are traditionally farmers and have come to play a relatively important role in the recent history of Ivory Coast: the State's first President, Félix Houphouët-Boigny, was a Baoulé; and since the Ivorian cocoa boom of the 1960-1970s, the Baoulé have also become one of the most widespread ethnicity throughout the country, especially in the Southern forests where they are amongst the most numerous planters of cocoa, rubber, and coffee and sometimes seem to outnumber the local native ethnic groups.  Many Baoulé art objects are restricted to be seen only by the individual for whom it was made or a specific group of people as they are often considered to be powerful spiritual objects.

Many Baoulé art objects are restricted to be seen only by the individual for whom it was made or by a specific group of people. They are often considered to be powerful spiritual objects. The most powerful spiritual objects are the men's sacred masks, bo nun amuin. This mask is a boxy helmet mask representing a menacing animal with bared teeth. Viewing the mask is restricted to men. If a woman or child sees the mask they risk serious injury or death. It is danced in times of trouble to protect the village and at important men's funerals. When the bo nun amuin mask is danced it can become very wild and violent. The spirit may chase the men through the village or wreak havoc by destroying things in its path.

Posted by Boldon Auction Galleries at 13:08