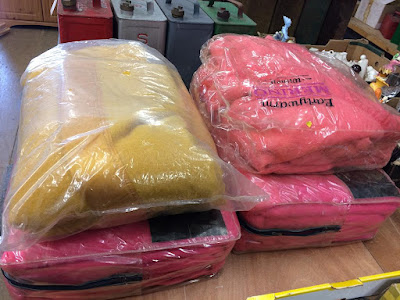 By the 1670s the Oxfordshire town of Witney was supplying blankets, made from locally produced Cotswold wool, to the Hudson's Bay Company in North America. Highly prized in the cold climate for their excellent insulating and water repellent qualities, they were exchanged for the beaver pelts much sought after in Europe. By the end of Queen Victoria's reign Early's of Witney were receiving orders from across the globe including Spain, Portugal, the United States, Bermuda, Australia, Newfoundland, South Africa and South America. Wellington's armies were supplied with Witney blankets and this military supply tradition continued with 85% of the 718,000 blankets made in 1944 being for military use. Production of the famous brand was eventually extended world wide with Witney blankets being made under license in Canada, the Czech Republic, India, New Zealand and the United States. The last Witney blanket mill ceased production in 2002.

Taken from BBC A History of the World, The British Museum
Posted by Boldon Auction Galleries at 15:25