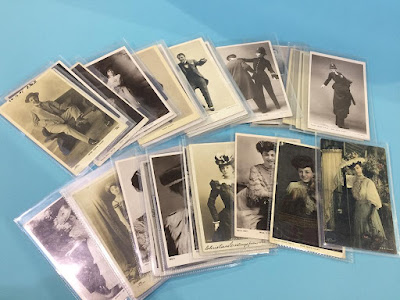 Lot 214.
To be auctioned on Wednesday 3rd November, a collection of black and white postcards relating to Miss Vesta Tilley.
Estimate £30 - £50

Matilda Alice Powles (1864 - 1952) was an English music hall performer.  She adopted the stage name Vesta Tilley and became one of the best-known male impersonators of her era.  She typically performed as a dandy or fop as can be seen in some of these postcards.  By the 1890s Vesta Tilley was England's highest earning woman.  At a Royal Command Performance in 1912 she scandalised Queen Mary by wearing trousers.  During the First World War she became known as England's greatest recruiting sergeant, singing patriotic songs dressed in army fatigues.  Her last performance was in 1920 at the Coliseum Theatre in London.

Posted by Boldon Auction Galleries at 15:42