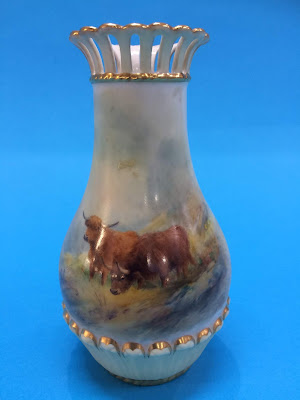 
Renowned for their famous Highland Cattle and Gamebird scenes, the Stinton family are probably the best known of all Royal Worcester artists, with members of the family painting at the various Worcester factories for almost one hundred and sixty years. Undoubtedly the better known are Harry Stinton, James Stinton and Harry's father John Stinton. The family had many more relatives who also participated and inspired the art and designs for Worcester.

Founded in 1751, Royal Worcester is among the most popular English porcelain factories favoured by collectors.

1751-76 Was the First Period of Worcester and is occasionally referred to as the Dr. Wall period after John Wall. John Wall was one of the founders and a major shareholder. The formula for soft paste porcelain was the formula for choice during this period, which was obtained when they took over Lund's Bristol Porcelain works in 1752. The need for hand painting was reduced in 1757 when Worcester introduced the use of transfer printing on porcelain, reducing the time and expense of production. Thomas Flight purchased the company in 1783 for his sons Joseph and John, starting changes in both the paste and style of decoration. A much whiter body started to be produced and the style became more neoclassical. Martin Barr became a partner in the company in 1793 and then in 1840 Worcester amalgamated with Chamberlains’. Chamberlains were also located at the Worcester site, but still produced works from both. In 1847 Worcester relocated its operations into the Chamberlain’s factory and became known as Chamberlain’s Worcester. This was later changed to Kerr & Binns in 1852 when W.H. Kerr joined the firm. Being renamed again in 1862 to the Royal Worcester Porcelain Company, and more everyday works were produced.
The company then merged with Spode in 1976 and reduced its staff from 2003 to 2005, eventually going into administration in 2008 and then ceasing trading in 2009. The trading name and brands (including Spode), but not the factories in Stoke-on-Trent, were acquired by Portmeirion Pottery Group.
Posted by Boldon Auction Galleries at 15:11