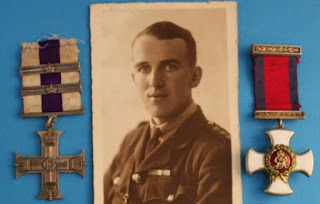 
A MAGNIFICENT seven medals won in battle by a First World War hero have fetched £14,000 at a South Tyneside auctioneers – over three times their asking price.

It had been listed for sale at between £3,000 and £5,000, but received a flurry of bids from military history lovers, both at the auction and via telephone and the internet.

The array of medals included a prestigious Military Cross, inscribed Armentieres, 23.11.16, 31.3.17, N.B.P. for conspicuous gallantry in action, after leading a successful raid into enemy trenches, in which he was severely wounded.

Also included in the lot from the decorated soldier was a Distinguished Service Order medal for conspicuous gallantry and initiative during the operations east of Solesmes in October 1918.

“The winning bid came from in the room.  “There was an awful lot of interest for Major Pigg’s medals because of their provenance and the history and deeds that he did.  “They went for a lot more than we ever expected.”

Major Pigg, who was born in 1894 and joined the Army in 1914, commanded the 1st Battalion Northumberland Fusiliers in three assaults on enemy territory.

He then went on to serve the Northumberland Fusiliers again in the Second World War.

As a Major commanding ‘C’ Company in May 1940, he became second in command of the battalion evacuated at Dunkirk.

The impressive collection was given over to be sold to the auctioneers by a family member.

Originally from Northumberland, Chaston was awarded the medal for saving the life of Philip Goddard at Alexandra Dock, Hull.

Posted by Boldon Auction Galleries at 09:50