Published on Tuesday 4 December 2012 in the Sunderland Echo 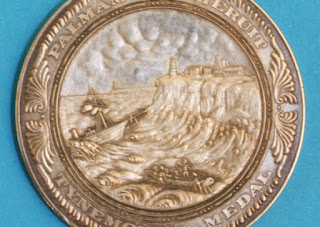 MEDALS of honour earned by a pair of war heroes will go under the hammer tomorrow.

Seven medals awarded to Major Norman Batey Pigg and a rare Tynemouth Medal, given to Percy Catmore Chaston for saving the life of a man stricken at sea, are expected to raise thousands of pounds at Boldon Auction Galleries.

The treasured awards have been given to the auctioneers by family members, giving historians a chance to grasp a slice of history.  Major Pigg was born in Seaham in 1894 and joined the Army in 1915 before serving in both the 1st and 21st Battalions Northumberland Fusiliers.

He received the prestigious Military Cross, inscribed Armentieres, 23.11.16, 31.3.17, N.B.P. for conspicuous gallantry in action, after leading a successful raid into enemy trenches, in which he was severely wounded.

Also included in the lot is a Distinguished Service Order medal for conspicuous gallantry and initiative during the operations east of Solesmes in October 1918.  Major Pigg commanded the 1st Battalion Northumberland Fusiliers in three assaults on enemy territory and went on to serve with it again in the Second World War.

As a Major commanding ‘C’ Company in May 1940, he became second in command of the battalion evacuated at Dunkirk.  The other medals in the collection include The Great War for Civilisation 1914-1919 medal and the 1914-1918 War Medal.

During the same sale, Mr Catmore Chaston’s Tynemouth Medal will be open for bids.  It was handed out on April 1, 1916, for Bravery in Saving Life at Sea, and is included in the collection along with a 1914-1918 War medal, and a Mercantile Marine War 1914-1918 medal.

Originally from Northumberland, he was awarded the 49th Tynemouth medal for saving the life of Philip Goddard at Alexandra Dock in Hull, when he woke in the bunch of his boat to hear the cries of men in the water and then dived in to rescue a man.

The lot is expected to raise between £300 and £500, though auctioneers feel it could be deemed of higher value to military collectors.

The Fine Art and Antiques sale at Boldon Auction Galleries in Front Street, East Boldon, gets under way at 10am on Wednesday.

Auctioneer Giles Hodges said: “The collection from Major Pigg was brought to us on a valuation day. It will be of great interest due to the gentleman’s military history.

“Percy Catmore Chaston also has a great history in the area. The collection was given to us by a relative now living in the south who wanted to ensure it stayed within the North East. We’ve never seen a Tynenouth Medal at auction before.

“We have put the lot price down as £300 to £500, but it was hard to value. It would be much sought after for any collector or museum.”

Posted by Boldon Auction Galleries at 11:48