Pick of the week 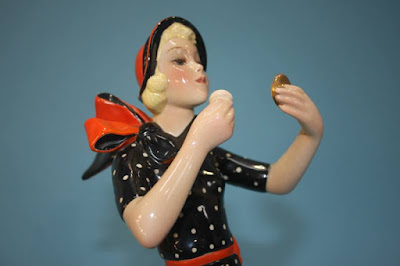 Read all about the record breaking Lenci figure we sold last week.

Stylish Lenci skyscraper lady is on top of the auction world after £34,000 bid

The stylish Art Deco pottery figures for which Ars Lenci became celebrated were first shown at the Turin international exhibition in 1928.
Among the large-scale models unveiled that year was Il Grattacielo (Skyscraper), a striking figure of a young lady with a compact and powder puff standing on one of the high-rise buildings that had began to occupy Europe’s land-strapped cities.
As with many Lenci models, the designer Abele Jacopi (1882-1957) took a cue from the pages of Vogue magazine, dressing the subject in a modish black and white polka dot dress with orange bow.

The example offered for sale at Boldon Auction Galleries near Sunderland on October 2 was in relatively good condition with just some small chips to the extremities.
It came for sale from a local source with an estimate of just £100-150 – the sort of sum that one of the limited edition reproductions of this figure might make.
Instead, with the painted mark Lenci Made in Italy, Torino, 28, it attracted a host of online and phone bidders before selling at £34,000 (plus 17.5% buyer’s premium) to a buyer on thesaleroom.com.
The price is thought to be a new record for Lenci. It was almost twice the £18,000 bid at Christie’s South Kensington in 2011 for another (restored) version of Il Grattacielo and bettered the £32,000 bid in the same rooms in 2006 for the 21in (53cm) figure of a coquettish nude in Egyptian headdress titled Abissinia.
Posted by Boldon Auction Galleries at 16:03