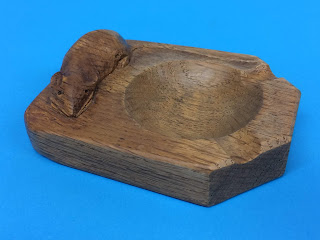 Do you know the origin of the trademark mouse?
Apparently the origin of the mouse as the famous Yorkshire man's mark was almost in the way of being an accident. He was carving a large cornice for a screen with a fellow carver who remarked he was as poor as a church mouse.  Robert Thompson promptly carved a mouse on the screen and henceforth the mouse became his trademark.
Posted by Boldon Auction Galleries at 15:42

Hi, did this item sell? I believe my father brought this to yourselves a few years ago? It was my grandmothers and I’m keen to become its owner again