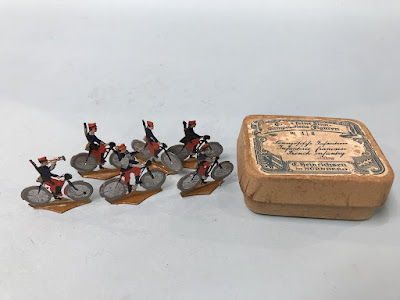 The lead toy business was founded in Nuremburg by Ernst Heinrichsen in 1839, continuing to produce lead figure designs for almost a hundred years.  The family run business produced over 16,000 designs during this time.

Heinrichsen was credited with popularising 'Nuremburg scale' for flat lead figures, which was about 28mm from ground to eye level and is also known as '3cm scale'

The flats were drawn on slate and shapes were then carved out of the material, front and back creating a two dimensional design.

Posted by Boldon Auction Galleries at 15:39