A Camerons Brewery advertising beer crate.
to be sold in our General Sale on Wednesday 25th July 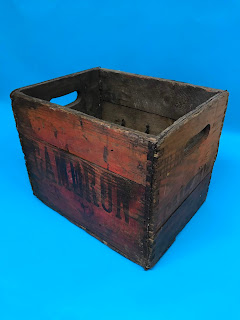 Camerons Brewery Ltd was founded in 1865 by John William Cameron in Hartlepool, County Durham, England. It is the largest independent brewer in the North East of England, with a brewery capacity of 1.5 million hectolitres (900,000 hl production in 2012) and a tied estate of 75 houses. It is one of the town's oldest industrial concerns, and has historically been one of the largest employers.
After one hundred years of growth through brewery acquisitions, the company had an estate of 750 licensed premises throughout the North East and North Yorkshire by the 1960s. The company subsequently struggled as the economy of its trading heartland suffered, and as it underwent a succession of owners with little experience of running pubs and breweries. Camerons lost its independence to Ellerman Lines in 1974, followed by the Barclay Brothers in 1983 and Brent Walker in 1989. Brent Walker spun off the majority of the tied estate as a separate company called Pubmaster, which was acquired by Punch Taverns in 2003.
Camerons was purchased in 1992 by Wolverhampton & Dudley, which invested heavily in the brewery before selling the company to Castle Eden in 2002, who closed their own site and moved all production to Camerons. The company now has a relatively small tied estate but is the ninth largest brewery in the country. As a result, around 80 per cent of its business involves contract brewing for other companies, such as Heineken, which owns 24 per cent of the company, and Carlsberg.
Camerons is known across the United Kingdom for Strongarm, a distinctive ruby red bitter launched in 1955. Total production of Strongarm surpassed one billion pints in 2000. Across the North East it is also known for Castle Eden Ale and Trophy Special, both originally brewed at Castle Eden.
Posted by Boldon Auction Galleries at 09:54