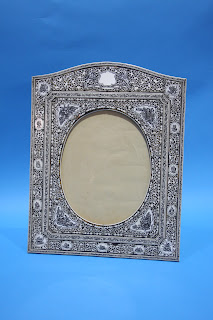 The outstanding craftsmanship on this mirror is typical of the grey or black decoration on creamy white ivory that is seen in furniture, mirrors, sewing boxes, trinket boxes and the like from the early 18th century onwards.
Posted by Boldon Auction Galleries at 14:06