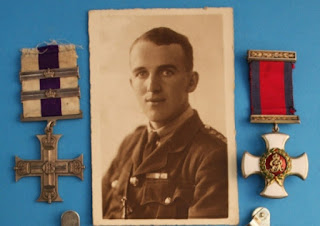 
Published on Thursday 6 December 2012 in the Sunderland Echo

A WAR hero’s medals attracted a winning bid of £14,000 as a crowd of hundreds gathered for the sale.

The seven awards collected by Seaham-born Major Norman Batey Pigg were bought as a collection at Boldon Auction Galleries yesterday, with the new owner among those who attended the sale after beating offers also taken over the phone and online.

Caroline Hodges, a director of the auction house, said: “There was an awful lot of interest for Major Pigg’s medals because of their provenance and the history and deeds that he did.  “They went for a lot more than we ever expected.”

Major Pigg was born in 1894 and joined the Army in 1915, serving in both the 1st and 21st Battalions Northumberland Fusiliers, commanding the 1st Battalion in three assaults on enemy territory.

As a Major commanding “C” Company in May 1940, he came second in command of the battalion evacuated at Dunkirk.

He was presented with the Military Cross for conspicuous gallantry in action after leading a raid into enemy trenches in the First World War, which left him seriously injured.

Others in the lot included a Distinguished Service Order medal for conspicuous gallantry and initiative during operations east of Solesmes in October 1918, the Great War for Civilisation 1914-19 medal, and the 1914-1918 War Medal.
He was also given further honours for his efforts during the Second World War.  He was awarded the Defence Medal, the 1939-45 Star and 1939-35 medal, with all passed on to the auctioneers by his family.

A rare Tynemouth medal belonging to Percy Catmore Chaston sold for £1,000 at the sale.
It was awarded in April 1916 for Saving Life at Sea for diving in to help a man who had fallen into the Alexandra Dock in Hull.

Posted by Boldon Auction Galleries at 09:45