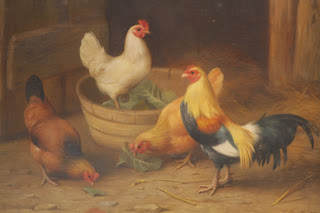 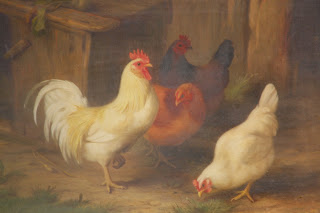 Part of an article published in The Journal Friday 7th December 2012 by Tony Henderson
Two paintings were put up for sale by a Sunderland vendor at Boldon Auction Galleries after spending the last 60 years wrapped in newspaper in a loft.
The paintings are by Edgar Hunt, who was born in 1876 and was one of the most accomplished animal and bird painters who is best known for his farmyard scenes.
One of the paintings, of pigeons feeding, sold at Boldon for £3,200 and the other, of hens in a farmyard, made £9,400.
Also at Boldon, seven medals awarded to Major Norman Batey Pigg, who was born in Seaham in County Durham and who fought in both world wars, fetched £14,000 – three times the pre-sale estimate.
The medals had been estimated at between £3,000 and £5,000.
They included a First World War Military Cross and Distinguished Service Order, both awarded for conspicuous gallantry in action.
A brass toilet door sign for the Chief Constable of Sunderland sold for £35, also at Boldon.
Read more: Journal Live http://www.journallive.co.uk/north-east-news/todays-news/2012/12/07/forgotten-finds-fetch-almost-20-000-at-north-auction-61634-32378734/#ixzz2EMHOcvOJ
Posted by Boldon Auction Galleries at 09:58