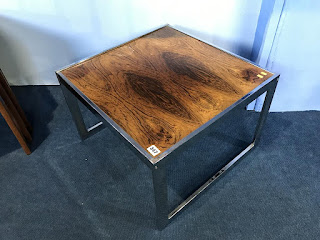 Formed as Production Facilities in 1953 by Frederick Bates and his son David in Birmingham to produce contract furniture for hospitals, canteens and coffee bars. A range of avant-garde furniture was developed and the company changed it's name to Pieff in 1970.  Originally aimed at up market contract buyers the range appealed to retail customers and soon Heals, Waring & Gillow, Harrods, John Lewis and House of Fraser were stocking the Italian influenced designs.  By the mid 1970s Pieff furniture could be seen on iconic television programmes such as "The Good Life", "Blake's Seven" and "This is Your Life" as well as winning a contract to supply British Embassies around the world.

Posted by Boldon Auction Galleries at 09:53