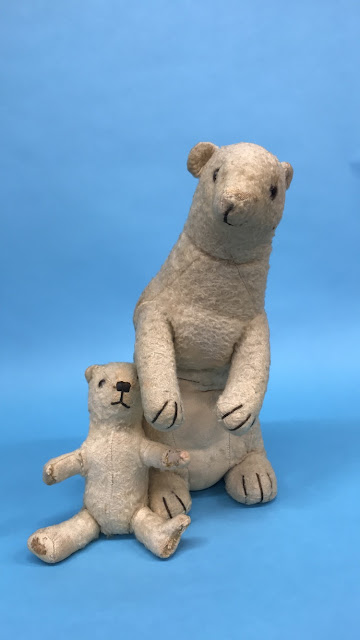 A Deans white mohair mother bear sitting on her hind legs, having orange glass eyes, stitched mouth and cloth nose, holding her cub with short white plush stitched nose and mouth, with Deans Rag Book label to the bottom of mother bear and Deans Rag Book label to top of neck to cub.
Mother 42cm tall, Cub 18cm tall
Both mother and cub are well loved and worn
For Auction in the Antique and Interiors Sale 5th February 2020 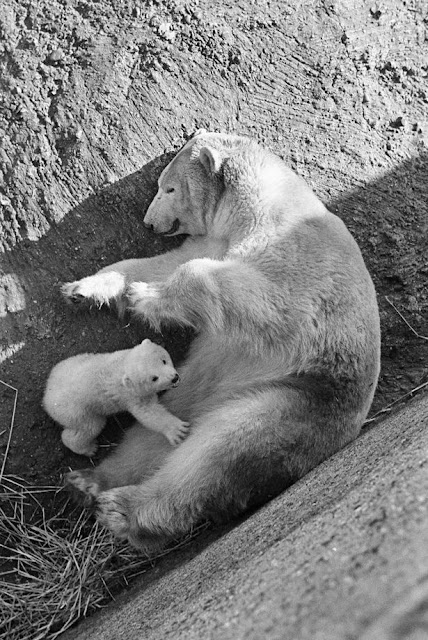 Ivy and Brumas were produced by the Deans Ragbook Company.  They were made to commemorate the birth of the first polar bear at London Zoo on the 27th November 1949, over 70 years ago.

Brumas was named after her keepers Bruce and Sam whose names were reversed. Although Brumas was female, the press reported that the bear was a he so the public thought that the cub was male, a belief that is still widespread.

Brumas was the first baby polar bear to be successfully reared in Britain and was an immediate attraction with the public. She caused such interest that, in 1950, the Zoo's annual attendance figures reached the 3 million mark. Brumas died on 17 May 1958.

Both bears proved a popular merchandise resource and were celebrated in newsreels, books, postcards, toys and other souvenirs. Dean's Rag Book Company were granted the licence to produce soft toy versions of the bears. 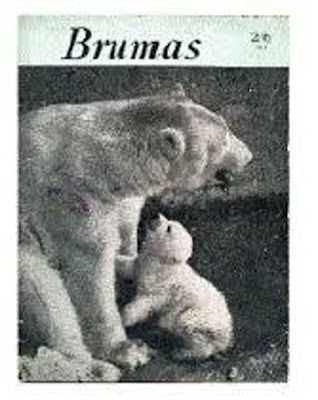 Posted by Boldon Auction Galleries at 14:55