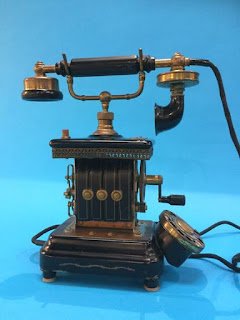 This fantastic, rare, antique Danish Hand Crank Telephone will be offered for auction in our
Antique and Interior Sale on Wednesday 8th August.

The table top phone has the Fleur De Lis (translated as ‘lily flower’) beautifully carved around the top plate and the plaque on top reads "SPØRG, OM DER TALES, FORINDEN OPRINGNING SKER" (translated ‘Ask, if someone is speaking, before calling’). On the bottom it reads "KJØBENHAVNS TELEFON AKTIESELSKAB" which symbolises the "Copenhagen Telephone Company" (KTAS, now Tele Denmark), the phone circa 1920-1930s is in excellent condition and working order.

Many early manual telephones had an attached hand-cranked magneto that produced an alternating current (AC) at 50-100V for signalling to ring the bells of other telephones on the same line and to alert an operator at the local telephone exchange. These were most common on long rural lines served by small manual exchanges which did not use a common battery circuit. The telephone instrument contained a local battery, consisting of two large "N° 6" zinc-carbon dry cells, to provide the necessary current for the transmitter. By around 1900, large racks of motor-generator set in the telephone exchange could supply this ringing current remotely instead and the local magneto was often no longer required, but their use continued into the mid-20th century. Telephone magnetos featured a large gear rotated by hand with a handle, that drove a much smaller gear on the armature rotor, providing a high gear-ratio to increase the rotational speed of the magneto armature. A mechanical switch on the output terminals engaged only when the rotor was turning, so that the magneto was normally disconnected from the telephone circuitry. 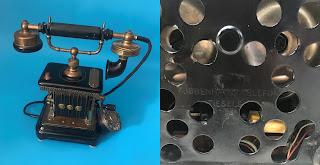 Posted by Boldon Auction Galleries at 14:54