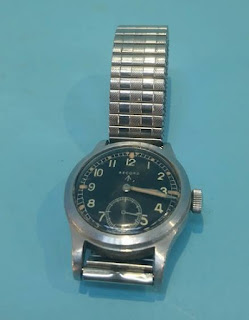 The first non-civilian wristwatches ever used by British forces, they are said to be some of the most sought after military timepieces today.The  name of an iconic movie from the 1960's, The Dirty Dozen depicts the misadventures of 12 fictional soldiers during World War II. It is also known, in watch collecting circles, as the name given to a group of 12 watches worn by those who actually fought in WWII – specifically, British soldiers. Commissioned by the British Ministry of Defense (MoD) during World War II, the watches have become some of the most collectible – specifically (but not exclusively), by British collectors.


To be sold 14th March Antique and Interiors Sale
Posted by Boldon Auction Galleries at 10:16