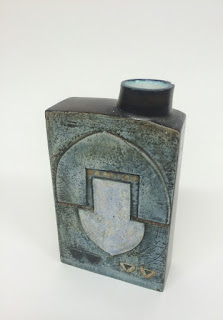 The Troika pottery was established in St. Ives, Cornwall by Lesley Illsley, Jan Thompson and Benny Sirota in 1963. The name Troika (meaning a Russian sleigh drawn by three horses) chosen for its sharp, angular sound that hinted at the sharp, angular forms they had in mind for production.  The dream was to produce innovative mould-cast wares – heavily textured monolithic wares were the result.  Due to the size of the kiln and the small operation only small items could be produced at first, such as bottles and tiles.  In late 1963 a larger kiln was purchased and larger pieces created.  The move to Newlyn saw fresh creativity amongst the colony of artists in 1970 and the pottery prospered.  By the early 1980’s the impetus waned with two of the three original founders leaving and the pottery closed in 1983. Despite this, Troika Art pottery is ranked amongst the most distinctive pottery produced in the 1960’s and 1970’s and remains highly sought after.
Posted by Boldon Auction Galleries at 14:39